The resistance to welcome LGBT right-wingers into the Republican Party is counterproductive to the movement to further traditional American values.

This past week’s online discourse on the topic of accepting homosexuality in the GOP has been quite eye-opening for many members of the LGBT community who are on the right side of the aisle.

It’s difficult to pinpoint who or what exactly started the dialogue on Twitter, but the heated conversation included some major figures in conservative politics. This included former republican congressional candidate Lauren Witzke, senior legal advisor to former President Trump; Jenna Ellis, republican activist Scott Presler, and former acting Director of United States National Intelligence Richard Grenell. Witzke and Ellis were on the side of religious traditionalism, as they espoused anti-gay views. The loud opposition was led by Presler and Grenell, who are both openly gay men.

I myself became somewhat involved when I posted a tweet with a link to an NBC report on how the official Republican Party platform is still against gay marriage, despite The Supreme Court striking down all state bans on such unions in 2015.

Ellis quote-tweeted her response to me, saying that “Marriage by definition is one man and one woman. A ‘union’ of any other kind is not a marriage. The government cannot change that, any more than it has authority to change the biological sex of a person by pretending to “recognize” a preferred gender.”

According to the Merriam-Webster dictionary, the word “marriage” is defined as “the state of being united as spouses in a consensual and contractual relationship recognized by law.” To many Christians such as Ellis, the biblical definition of marriage is between a man and a woman. Fortunately, traditional American values include the separation of church and state, ensuring freedom for individuals who don’t follow a particular religion.

Prominent members of the Republican Party like Ellis continuously claim to be conservative while going against the small-government values that the party was built on. Trump, a Republican, was the first president to be pro-gay marriage throughout his campaign and presidential term. Even former President Barack Obama, the democrat under which gay marriage was federally legalized, said “I believe marriage is between a man and a woman. I am not in favor of gay marriage,” in an MTV interview right before the 2008 general election.

Ellis did not respond when I replied to her quote-tweet with a picture of Trump holding a gay pride flag labeled “LGBTs for Trump.” Was she purposely ignoring the fact that the president she worked so closely with was proud to support gay marriage and to accept members of the LGBT community into the republican party, or did she forget?

Elsewhere on Twitter, the main event of the evening was taking place between Witzke and Grenell. The former Acting Director of U.S. National Intelligence posted a statement from a transgender woman who attended CPAC, talking about their positive experience at the conference. Witzke, who lost her congressional bid with only 39% of the vote, responded with, “We’re celebrating mental illness now?”

The following argument ensued, leading to Witzke saying that gay people do not belong in the republican party. 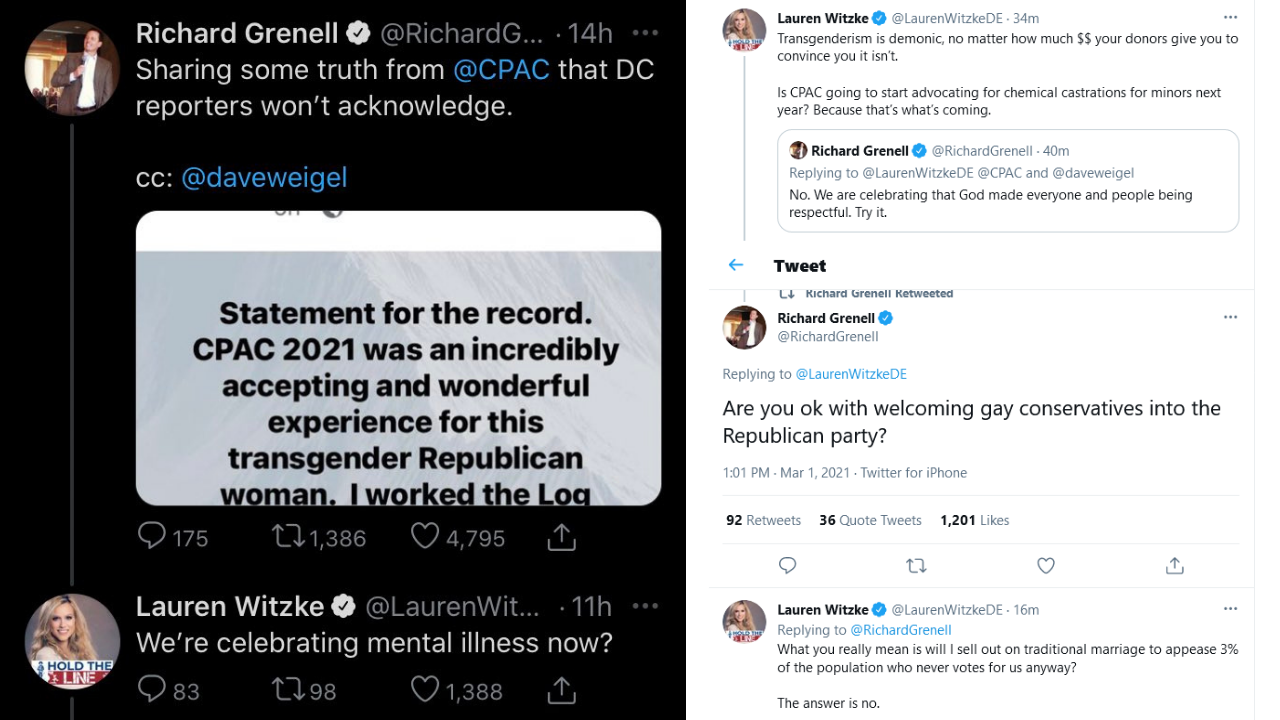 Here is where Presler, the activist who has single-handedly registered countless Republican voters across the country jumped into the conversation, addressing his former friend, Witzke. Witzke brought up a personal conflict between them but did not publicly expand on her statement any further. Unfortunately, shortly after this conversation took place, she was permanently banned from Twitter so screenshots are all we have.

So here, we have a former republican congressional nominee telling two prominent members of the Republican Party (one of whom worked in the Trump administration) that they are not welcome. The fact that the party is divided over this is astonishing to me, as it is clearly bad for optics and winning elections. More Americans support gay marriage than not, and it is already a settled issue for all intents and purposes.

Gay people do not “choose” their sexual attraction, which often actually causes them extreme hardships throughout their lives. What good does pandering to a relatively small sect of republicans that believes in an overreaching, theocratic government that makes decisions based on religious beliefs instead of promoting liberty? Accepting the fact that gay people exist and can hold conservative beliefs will further the overall goals of the Republican Party. Refusing to acknowledge the work that activists such as Presler do for the GOP because of his sexuality does much more harm than good.