One of the hallmarks of good governance is high levels of political efficacy, or the belief of the average citizen that their voice is heard in political matters. This is particularly important in America, which emphasizes representative government’s role in helping secure individual liberty.

It might, therefore, seem discouraging that a recent AP-NORC poll found that only about “half of Americans, 45%, think democracy isn’t functioning properly, while another 38% say it’s working only somewhat well.”

Per the framing of the poll, this low vote-of-confidence for democracy’s success rate comes “even as a large majority agree that core democratic principles like a fair judiciary and a democratically elected government are important to the country’s identity.”

There are a couple of issues here.

First of all, nowhere in the language of the poll does the phrase “core democratic principles” appear. The pollsters asked respondents how important certain values were to the U.S.’ identity and then ranked those in order of the responses that received the most positive support. These include familiar concepts like a fair judiciary, individual rights preserved by the Constitution, and democratically-elected government. 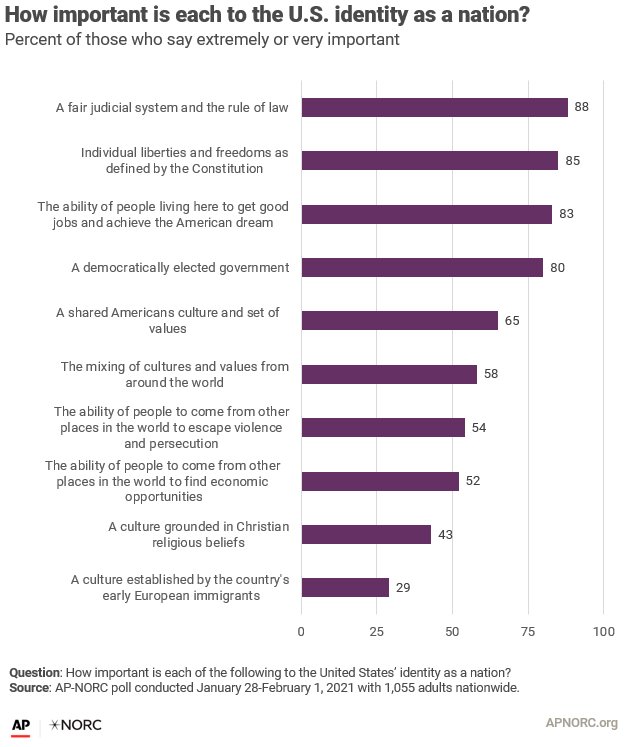 The pollsters then interpreted the meaning of the responses they recorded–injecting their own biases–by claiming these are key components of democracy.

And that leads us to another problem.

By linking these ideas to democracy, the pollsters are reinforcing a widely-held belief in America, which perhaps helps explain why belief in democratic success is so low: and that is that democracy not only doesn’t mean what most people think it does, but it really doesn’t play a meaningful role in American government.

Democracy, in America, tends to have a colloquial definition. It tends to be perceived as something amorphous: a measure of government’s responsiveness to the public will. This is actually closer to political efficacy, but it plays into the populist sentiments that have become dominant in political identities in the past few decades.

In a certain sense, this definition of democracy is spot-on. Because, in its purest form, democracy is simply the will of the mob put into action. It takes its moral cues from the mob: determining right and wrong simply by polling the populace and taking as authoritative whatever the largest chunk of people say. It is an absolute system of government, with all authority vested in the majority. There are no restraints on power, no prohibitions made by governing documents. In short, none of the ideas or institutions the AP-NORC poll claims are key components of democracy are actually inherent to real democracy.

There are also no real rights in this kind of government: whatever freedoms an individual has are down to the charity of the majority and can be taken away as quickly as they were given should the whim strike the majority at any point in the future. True democracy is all about power politics: if the majority loses its numerical supremacy, and the right to govern, it can become oppressed by vengeful members of the former minority seeking reprisal.

It’s a kind of tit-for-tat nuclear arms race that encourages tribalistic demonization of other factions in society.

This, obviously, is incompatible with American government, which offers staunch protections to what Ayn Rand rightly termed the smallest minority in the world: the individual.

There are two kinds of democracy: substantive democracy and procedural democracy. The United States is not the first of these and only utilizes the second in some of its institutions.

What’s described above is substantive democracy and it’s not inclusive or compatible with freedom or any of the institutions modern Americans associate with the term.

Procedural democracy, however, does incorporate some of the institutions AP-NORC named. As the name suggests, procedural democracy is less about the foundations of government and more about how it behaves. Elections that foster the participation of the whole citizenry, which appoint representatives answerable to the will of the majority, are integral to procedural democracy.

Republics–which America is–utilize procedural democracy in institutions that make determinations based on the will of the majority. The best example of this in American government is the House of Representatives.

In Federalist 10, James Madison laid out two key differences between a democracy and a republic, which is crucial to accurately understanding how procedural democracy operates in American government:

The effect of these differences, again according to Madison, is that the public’s views are “refined and enlarged” by passing them through the medium of a chosen body of citizens, which, in America, means the legislature (and the House of Representatives more specifically).

This is because a legislature is a deliberative body, which gives voice to a number of different perspectives–all representing a greater portion of like-minded people in the broader country–who have the opportunity to win skeptics over to their side. But, in the end, the majority prevails.

Importantly, Madison noted that the reverse effect could also happen, especially if the American people choose their representatives poorly and voted into office venial self-seekers who would put their own ends above the legislative responsibility.

But it is precisely because it is difficult to predict whether the representative one votes into office will stay true to his campaign promises that America only utilizes procedural democracy in some of its institutions.

As originally founded, the Senate is not democratic; it was designed to ensure that states, whose ability to set their own policies are affected by the federal government, were represented. This is why each state has two Senators, which were originally appointed by state legislatures.

But, in striking a balance between fairly representing different constituents, the American government sometimes abandons democratic procedure. But so long as Americans don’t understand the real and limited role democracy plays in American government, they will unfairly judge its institutions as failing their objective. In reality, straying away from democracy in its purest forms helps insure those in power don’t abuse institutions and promote the majority at the expense of the minority. Protecting the minority is not strictly democratic, but it is a hallmark of American government. And it’s this, not democracy, that needs to be protected.